The scheduled competition was started at 2 pm on 24th July 2022 through team registration where 8 teams completed their registration to participate in the Moot Court Competition, at 2:30 pm. Tanjila Tamanna, Moot Court Consultant, Lecturer, Dept. Of Law, BU  briefed competition rules and  conducted the team lot & memorial exchange session which was held at 3:40 pm same day. Honourable Vice Chancellor (In Charge), Britannia University, Prof. Dr. Surajit Sharbabidya inaugurated the event after his important keynotes. The Chairman (In-charge) Asma Akter and other faculty members also instructed the participants with their valuable speeches.

On 26th July 2022,  the final round of the competition was held. The advanced round was started through team reporting from 9 o'clock to 9:29 am. An Adjudicators briefing session was conducted from 9:30-9:59 am. The Semi-final round started at 10 o'clock and was conducted by 3 benches of judges. There was a remarkable fight between 2 semi-final rounds among 4 teams. The matches were between team 02 vs 06 and team 04 vs 05. There was a breathless moment for each team when the results of the semi-final were going to announce. The results were published at 12:15 pm. Team 04 and 06 were selected for the final round. They exchanged their memorials at 12:30 pm. After lunch and prayer break, an Adjudicators briefing session was conducted from 2 o'clock to 2:29 pm. Then the final match started at 2:30 pm. Each team performed their level best before 5 benches of judges. Some spectators enjoyed the final round. The match finished at 4 o'clock.

The Winner team members were,

The runner up team members were,

Al Amin Pial was awarded with the best lawyer of the winning team, Team 04 was awarded the best memorial award and Touhida Sultana was awarded the best mooter. The champion team and runners-up team received their trophies from our guest of honor Vice-chancellor ( In-charge) Prof. Dr. Surajit Sarbabiday and the Chairman ( In charge), Dept. Of Law, BU, Asma Akter, Judges, guest and respected faculty members.

Lastly, with a vote of thanks organizers announced the closing of the competition.

# Congratulations to both Champion and Runners Up team. 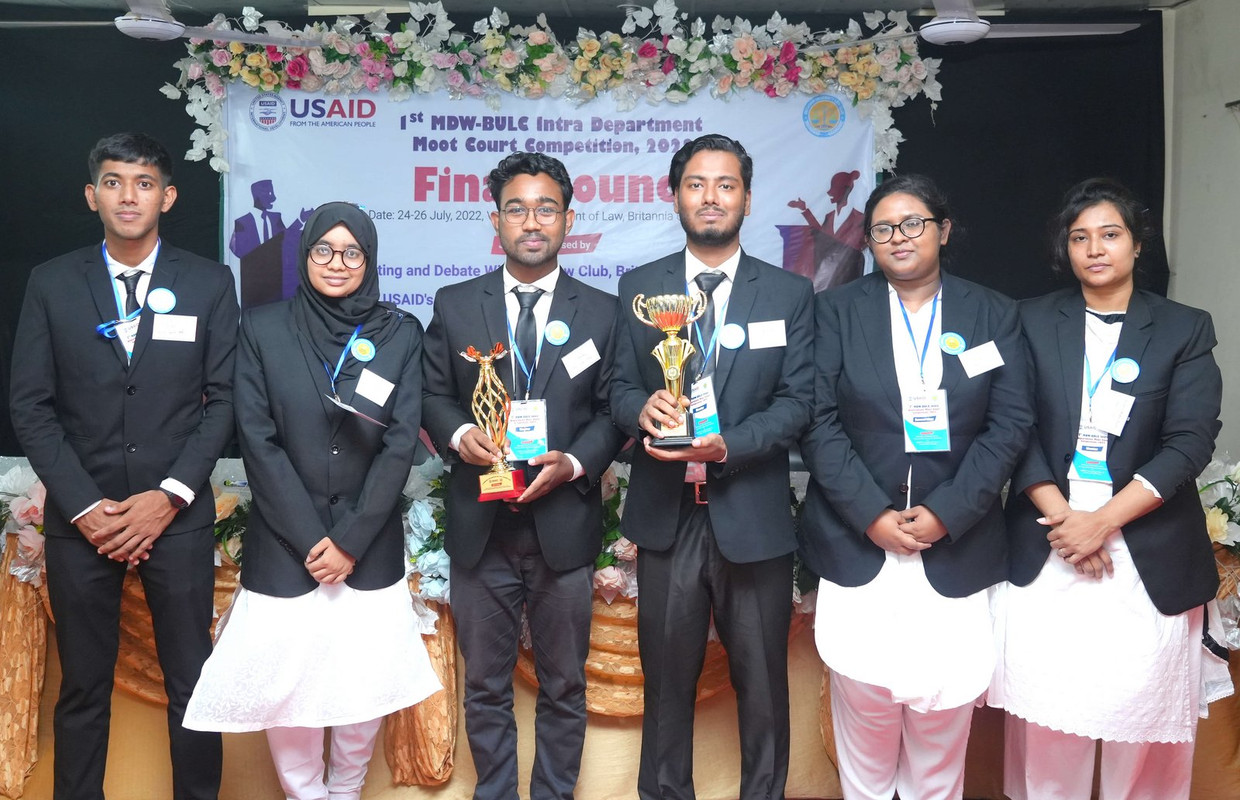